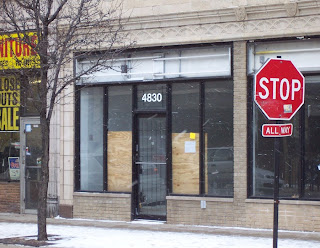 What a difference a year makes.

In January 2008, UCC and Uptown United sent letters to Ald. Shiller saying that 4830 N Sheridan was not the best spot for a proposed Labor Ready office, citing its location on one of Uptown's business corridors, and asking Ald. Shiller to turn down its request for a special use zoning permit. StopLaborReady.org was already online.

On February 15, more than 100 residents from the 46th and 48th Wards showed up at City Hall in front of the Zoning Board of Appeals to protest the application of a special use permit, suggesting that Labor Ready consider the Ravenswood Corridor, which would not require rezoning, as a more suitable location for a day labor office. Ald. Shiller made her case on behalf of Labor Ready, displaying 50 letters she claimed were from community members in support of it coming to the Sheridan Road location.

In March, Uptown Chicago Commission challenged the "expert testimony" and appraisal given at the ZBA hearing as inherently flawed and started raising funds for litigation.

On April 2, the ZBA approved the special use permit that would allow Labor Ready to move to 4830 N Sheridan. Unhappy residents were described by the appraiser as "sour grapes."

On April 4, Medill student Matt Albucher reported that an FOIA request of the "50" letters that Ald. Shiller brought to the ZBA hearing revealed that 10 of them supported Labor Ready's move to 4830 N Sheridan (most in boilerplate language), and "ten times that many" opposed it.

In April, fundraising for a citizens' lawsuit to Stop Labor Ready commenced in earnest. More than $20,000 was raised.

On May 3, Uptown residents filed a lawsuit to prevent Labor Ready from opening at 4830 N Sheridan. Ald. Shiller was unavailable for comment. The hearing was scheduled for November 19.

On October 28, citing the economy, Labor Ready announced it would not be moving to Uptown "at this time."

Today - 4830 N Sheridan stands empty (except for some broken and boarded up windows), like so many other storefronts in the 46th Ward.

We wish many things were different...

We wish another business would open at that location, but suspect that being a murder site may be a deterrent for interested parties. We wish Ald. Shiller and the Zoning Board of Appeals had taken the residents, UCC and Uptown United seriously when they said it was an inappropriate location for a day labor office. We wish Labor Ready, upon learning of the community's opposition to the proposed site, hadn't decided to press on until litigation became the only option. We wish they'd selected an alternate location instead, as suggested.

However, the Labor Ready situation created some very good things: it brought residents from the 46th and 48th Wards together ... as Uptowners; it created activists out of people who never previously envisioned themselves in that role; and it made the community realize that you can, indeed, fight City Hall.