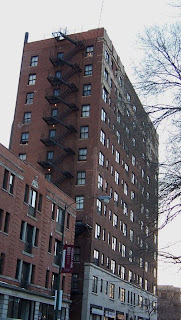 This week's News-Star has an article on Circle Management and the problems experienced by its subsidized tenants at three buildings in Edgewater. Good reading! Another building owned by the same company in Uptown was just in housing court this week.

"Managed by Circle Management and held in ownership by various limited liability companies, all three buildings have appeared or are scheduled to appear at four hearings in Cook County housing court within the next month. Two other buildings managed by the company in Uptown, at 1325 W. Wilson and 851 W. Montrose are scheduled for two more housing court hearings. A third Uptown building at 1039 W. Lawrence was cited and fined for building code violations in 2006.

Touted as offering affordable low-income housing, the six buildings received a combined $410,962 in subsidies according to a first quarter 2008 report from the city's Low Income Housing Trust Fund, a program in which building owners can apply for rental subsidies to reduce rent for the poorest of the poor."

Read the entire article here, including how the 48th Ward's aldermanic office worked with the Chicago Department of Housing to get rental subsidies from the Low Income Housing Trust Fund pulled from the Edgewater properties managed by Circle. Dare we hope the same might happen to the Uptown properties?