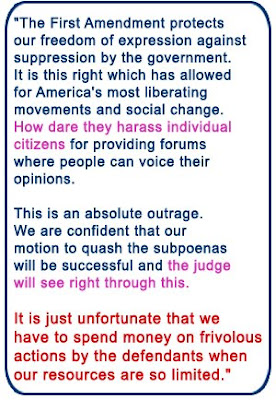 News-Star learned that the blogs in question are Uptown Update and What the Helen. Each blog was notified by e-mail that they had been subpoenaed as third parties through Google and that they have until Feb. 4 to file a motion to quash the subpoena. Both blogs are maintained anonymously and neither is affiliated with Fix Wilson Yard.

In December, the Uptown community group Fix Wilson Yard, which claims to represent more than 2,000 Chicago residents, filed a lawsuit against the City of Chicago and Holsten Real Estate Development.

The residents' lawsuit alleges numerous abuses on the city's part in the creation, planning, implementation and funding of the Wilson Yard TIF district and the corresponding Wilson Yard Redevelopment Plan.

Although News-Star was not able to get a copy of the subpoena at press time, Holsten's attorney, Tom Johnson, confirmed on Monday that Google was served with a subpoena asking for the names of the blogs' account holders. "We did issue a subpoena to Google," Johnson said. "The subpoena asks for all the information for two particular sites that Google has."

Both blogs are on the Web through Blogger, the hosting service of Google, the Internet giant known best for its search service. Johnson said the subpoena asks for ownership information of the blogs. Uptown Update is an active blog that has gained popularity as a clearinghouse for information about the neighborhood. What the Helen was active during the 2007 aldermanic election and has not been updated in over a year.

Both blogs have been highly critical of 46th Ward Ald. Helen Shiller. Shiller's supporters and detractors often debate the alderman's policies and neighborhood issues in both blogs' comments sections.

Johnson said the subpoena is not asking for the e-mail addresses or personal information of those who leave comments on the sites.

Holsten said that he was not aware that Google had been subpoenaed by his defense attorney for information about the blogs. "I tend to stay off the blogs," Holsten said "They can get pretty nasty."

Andrew Pederson, a spokesman for Google in Mountain View, Calif., said that he was not familiar with this particular subpoena. Google regularly receives subpoenas seeking information for a variety of reasons related to blogs hosted on Blogger.com.

Pederson said that unless third parties notify Google that they plan to quash subpoenas, Google must comply with subpoenas and turn over the information sought.

As a condition of using Google's services, bloggers must agree to the terms of Google's privacy policies, which include the disclosure personal information and the content of communications. Google is required to do so "in order to comply with any valid legal process or government request," according to Google's privacy policy. Such conditions include search warrants, subpoenas, statutes and court orders.

Attorneys for Fix Wilson Yard plan to file a motion to quash the subpoena before the Feb. 4 deadline.

In a comment filed to News-Star by e-mail Tuesday, members of Fix Wilson Yard said, "The First Amendment protects our freedom of expression against suppression by the government. It is this right which has allowed for America's most liberating movements and social change. How dare they harass individual citizens for providing forums where people can voice their opinions. This is an absolute outrage. We are confident that our motion to quash the subpoenas will be successful and the judge will see right through this. It is just unfortunate that we have to spend money on frivolous actions by the defendants when our resources are so limited."

Update: Gapers Block has picked up on the story: "Uptown Throwdown, By Ken Green. Uptown Update, the highly popular blog that has become a thorn in the side of Ald. Helen Shiller, particularly over the fate of the Wilson Yard Project, has been subpoenaed by the attorney for the yard's developer, Peter Holsten. Holsten is being sued by a group called Fix Wilson Yard, which opposes the project in its current state. Another area blog, the apparently defunct What The Helen, has also been subpoenaed."

Update #2: The WindyPundit also has a story on this: "Free Speech Department:
Google Subpoenaed Over Anonymous Blogs In Connection With Controversial Chicago TIF Project"

Update #3: The Marathon Pundit is now following this saga.

Update #4: Tom Mannis at The Chicago News Bench has an analysis of the events unfolding. Check it out here.

Update #5: And Chicagoist joins in, too.