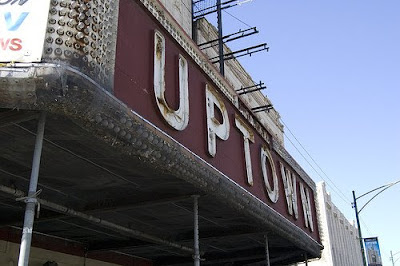 [Editor's note: Jerry Mickelson of JAM Productions sent the following email and asked that it be shared with the Friends of the Uptown. If his purchase is approved by the court, JAM will become the new owner of the UPTOWN THEATRE in Chicago. His message is fowarded here in its entirety.]

Words can't properly express my feelings of gratitude for the incredible efforts that all of you who are part of Friends of the Uptown have put forth on behalf of saving the Uptown Theatre. As all of you know, this is not just a theatre but a work of art that will never be built again which must be preserved. This masterpiece of [architects] Rapp & Rapp should live on and never ever be allowed to deteriorate to the pitiful condition it is in today.

I immediately fell in love with the Uptown Theatre the very first time I set foot in the lobby in 1974. I knew then there was something very special about this building and have felt that way ever since.

It took some time for me to convince Plitt Theatres [the owner at the time] to let Jam use the Uptown Theatre for concerts but I did succeed in 1975 when we presented the Tubes on Halloween. Some of the acts that Jam brought to the Uptown included Genesis, Bob Marley, Steve Miller, Bruce Springsteen & The E Street Band, Leon Russell, Foreigner, Boston, the Grateful Dead, Hall & Oates, Lou Reed, the Electric Light Orchestra, the Kinks, Supertramp, Roxy Music, Bryan Ferry, Frank Zappa, Peter Gabriel, Rod Stewart, the Allman Brothers, Dire Straits, Rick James and Santana. The last concert that Jam presented was with the J. Geils Band on December 19, 1981 since the owner did not pay the heating bill, the washrooms were barely working and there were other issues which we felt made the theatre no longer safe for anyone to use.

As we all know, since that date the theatre began to slowly deteriorate. The Uptown fell into the hands of some very onerous owners during this chapter in time who did nothing but continue to let the Uptown waste away. I met with [Rudy] Mulder and [John] Terzakis and also with the not-for-profit run by Michael Morrison and then by Paul Warshauer to try to strike a deal for Jam to become involved with the theatre but all of them were impossible to deal with and ultimately each one of them helped contribute to the sad state of the Uptown as it sits today. It wasn't until Bob Lunn took control that things for the Uptown started to move in the right direction.

Over this period of time Alderman Mary Ann Smith was there to protect the Uptown Theatre through this very dark phase of ownership. Without her a developer would have torn down this treasure but thankfully Alderman Smith stood up to defend this landmark time and time again. Through her efforts the City came to understand the importance and significance of the Uptown Theatre.

It's only been one day (now going on two) since the foreclosure sale occurred. You should know there was only one bidder who showed up on July 29 to purchase the Uptown Theatre and that was UTA II, a company whose members include but are not limited to Arny Granat and myself. While initially being surprised that we were the lone bidders, we fully understand why others did not show up. The fact of the matter is that the Uptown Theatre is a daunting project that faces many challenges for it to re-open. Not only will this be a very expensive project, it will take an incredible amount of time and effort to put the pieces of this intricate puzzle together in order to ensure the Uptown Theatre's future.

We don't have all the answers today about how all of this will come together but we do know a couple of things; (1) the Uptown Theatre now has owners who truly care about saving and preserving this architectural gem; and (2) we will reach out to all of you at the proper time to have you hopefully join with us in our effort. The Uptown Theatre would not still be here today if it wasn't for you and Alderman Smith and probably won't be here in the future without you and the Alderman.