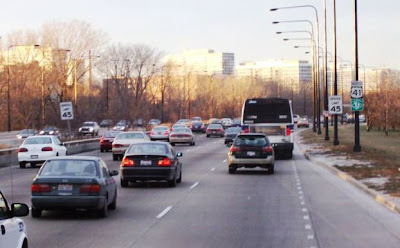 Lake Shore Drive resurfacing project set to expand to northbound lanes Tuesday
By Jon Hilkevitch, Chicago Tribune reporter, 11:23 AM CDT, August 29, 2008
The resurfacing of North Lake Shore Drive will expand to the northbound lanes between Irving Park Road and Foster Avenue starting Tuesday, the Chicago Department of Transportation said Friday.
Work on the southbound lanes started earlier this month. Lane closings and repairs will occur only in non-rush hours. Four lanes southbound in the morning and four lanes northbound in the evening will remain open during the project, CDOT said.
In the southbound direction, two lanes will be closed at 10 a.m. weekdays and reopen at 6 a.m. the next day. Some southbound ramps will be closed during the daytime hours as needed. Two northbound lanes will close at 7 p.m. daily and reopen at 2 p.m. the next day, CDOT said.
The $6 million project is scheduled for completion next year.
By Caring Neighbor - August 29, 2008