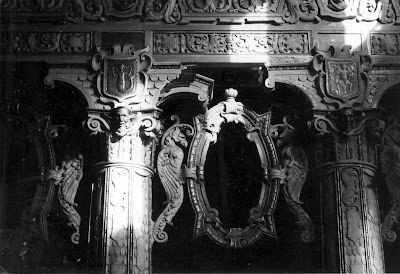 (Detail photo of the Uptown's interior provided courtesy of Friends of the Uptown. Click on it for a larger verson to get the full effect.)

Is a makeover for the Uptown Theatre waiting in the wings?

For decades, the Uptown Theatre's loudest champions have watched a succession of owners mishandle the once "palace of enchantment" as if it were a shabby clown painting on velvet. They remember the bad times, when sheens of ice covered the winding staircases in the Grand Lobby, of burst water pipes and investors that raised their hopes for building's restoration, only to walk away broke and defeated.

Since the announced sale of the Uptown Theatre to Jerry Mickelson of Jam Productions, the Uptown's champions are cautiously optimistic that the architectural landmark will finally get the makeover they've been waiting and fighting for. Mickelson's limited liability company, UTAII, purchased the theater in a court auction for $3.2 million last month. (Read the rest of the article here.)

And don't forget the News-Star's wonderful editorial on the subject:

'Not for today, but for all time': Relight the Uptown Theatre

By the time movie theater moguls, A.W. and Barney Balaban, and their brother-in-law, Sam Katz, opened the doors to their "palace of enchantment" on Aug. 18, 1925, Uptown, as well as the rest of Chicago, were in frenzy.

Upon the presentation of the theater's presentation to the Central Uptown District, one of the magnificent building's architects, George Rapp, declared, "Not for today, but for all time." No doubt many of us, impressed by our parents' and grandparents' tales of its lavish stage shows, or who attended a Jam concert there in our hazy youth, were impressed by the massive Grand Lobby's crystal chandeliers, the gilded décor and "room bosses" whose faces watched us from above as we moved around the mezzanine.