News-Star: "Back To Housing Court"

UPDATE from the comments: "I was in court this morning. The owner of the hotel is working on making the required improvements to the building. His manager is keeping people from loitering outside the hotel and Mr. Bomberg (the owner) also sent a rep to court for a graffiti charge when his building was tagged. He seems interested in working to improve the hotel. To address what happens beyond the doors of the hotel and on Wilson, it was my understanding that there will also be discussions with other city departments to work on the larger issues the residents of the hotel and the rest of the neighborhood, in general are facing. The next court date is December 11th-mark your calendars!" 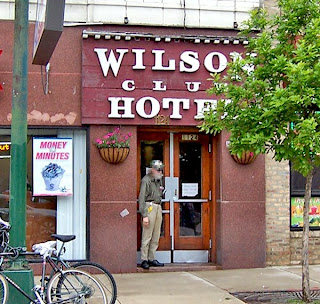 The current issue of News-Star has an article on today's Wilson Club Hotel hearing, including an interview with Jay Bomberg. It sounds like he intends to make a difference in how the hotel is run; we hope that today's court case provides some backing for his optimism.

Here are a couple excerpts from the article; the entire piece can be read here.

Before the May hearing, Bomberg said he evicted four residents for alleged criminal activities; a fifth resident was asked to leave in June, and four more residents have since been evicted. "I think the community will already have noticed that there is a whole lot less loitering in front of the building between ourselves and working with our two (commercial) tenants," he said.

Bomberg said he has instructed front desk staff to call 911 more quickly before incidents inside or outside the hotel can escalate. Security cameras have been installed in front of the hotel. Use of that camera resulted in the arrest of a graffiti tagger from the neighborhood, who was convicted and given 90 hours of community service.

"We call 911 a lot more often than prior management did. Check the statistics from the first six months of last year (under previous management) and this year, and calls are up 50 percent," Bomberg said. "Our own residents know now that they cannot hang out in front of the building. If people are out front loitering they are not going to be our residents.

"The house rule (for residents) is that if you want to take it somewhere, take to the park and go somewhere else. (Residents) can wait in front for a ride, then can wait for the clinic to pick them up, but hanging out is not going to be done," Bomberg added.

[...]"We're not asking anything of the (outside) community other than understanding and respect," Bomberg said.

The housing court hearing for the Wilson Men's Hotel is scheduled for 9:30 a.m. Aug. 14, in room 1111 at the Daley Center. News-Star will do a Web extra and follow up on the results of that hearing in the Aug. 21 edition.