3 Businesses Destroyed In Fire On Argyle This Morning 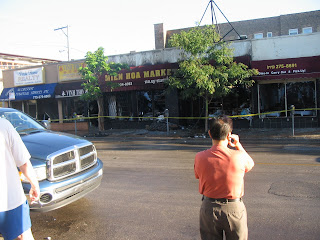 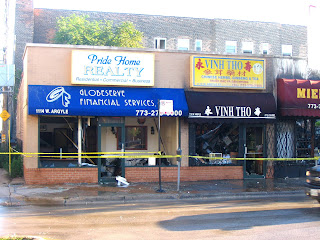 A reader alerted us to this story from the Tribune. They also sent in these photos showing the fire-ravaged area on Argyle.
Check out CBS2's coverage of the fire here.

THE BLOTTER 8:14 AM CDT, August 6, 2008
Two restaurants were destroyed Wednesday morning by an extra-alarm fire in Uptown, fire officials said.

No injuries were reported in the fire, which broke out shortly before 1 a.m. in the 1100 block of West Argyle Street, according to Fire Department spokesman Larry Langford.

The blaze started in a three-story building, which had a restaurant on the first floor, Chicago police said, citing preliminary information. WGN-Ch. 9 reported that the building houses six storefronts, four of which were destroyed. It said some residents in nearby apartments had to be evacuated because of thick smoke and the fast-moving flames.

The building is near a CTA Red Line stop, but CTA officials said there was no disruption to morning commuter service.

The fire was upgraded to a second alarm about 1:15 a.m. and was brought under control at 3 a.m.

About 120 firefighters responded to the scene.

The cause of the blaze was under investigation.