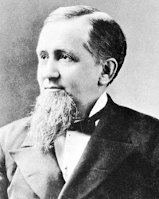 One of the behind-the-scenes reasons we celebrate Labor Day is spending his eternity right here in Uptown, barricaded deep under the ground in Graceland Cemetery.

George Pullman, who invented the railway sleeping car, also created a company town in Chicago (now the aptly named Pullman neighborhood). To increase profits during the 1893 recession, he cut workers' pay (he was their boss), but did not decrease their rents (he was also their landlord) or the prices at the stores (which he also owned).

This didn't make ol' George a popular man. In 1894, tens of thousands of workers belonging to the American Railway Union walked off the job, and almost immediately most of the nation was negatively impacted, as passenger and freight trains came to a sudden stop. Talk about a supply chain issue!

Things got ugly. President Grover Cleveland sent troops into Chicago to "convince" the workers to go back to work.

In response, the workers burned hundreds of railcars. Cleveland ordered the troops to fire on the crowds. 30 people died, and many were wounded. The strike was broken, but at a terrible human cost.

Naturally, this didn't make Pres. Cleveland or Congress very popular with, well, anyone, so they extended an olive branch and created a holiday to honor the workers of America, to be celebrated on the first Monday of September.

Spare the victims of the Pullman Strike a thought while you barbecue, shop the sales, and otherwise enjoy Labor Day.

(Interestingly, while most other countries celebrate International Workers Day on May Day, the U.S. government chose another day to honor its workers. The Haymarket Affair -- another Chicago labor uprising -- was closely connected with May 1st, and with anarchists. In effect, Labor Day was chosen to compete with May Day, and has largely eclipsed it in this country.)

Three years after the Pullman Strike, George Pullman died of a heart attack. He died a hated man in this city.

He was laid to rest at night in Uptown's Graceland Cemetery. Not only that, "Pullman’s coffin, covered in tarpaper and asphalt, is sunk in a concrete block the size of a room. On top of the block lie railroad ties and even more concrete. Why so secure? The family feared that Pullman’s angry workers [...] would resort to skullduggery at the gravesite."

There are benches and plenty of room to sit and relax on George Pullman's spacious monument. Drop by, bring a picnic lunch, and let him know what you think about him.