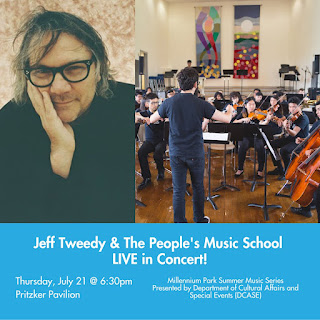 So what are you doing Thursday night?

You could go home.

OR... you could stop downtown at Pritzker Pavilion in Millennium Park and enjoy a free concert by Wilco founder Jeff Tweedy and performers from Uptown's own People's Music School.

Per a statement from TPMS:

The People’s Music School students will be in the company of many talented Chicago musicians during the concert. Making up Tweedy’s band is: James Elkington on guitar, Sima Cunningham on backing vocals, Macie Stewart on violin and backing vocals, and Liam Kazar on bass. Also in the band are Tweedy’s sons, Spencer on drums and Sammy on backing vocals."

The People's Music School has been in Uptown since 1976, and provides tuition-free music education to underserved students, not only in our area, but also in Albany Park, Back of the Yards, and Greater South Side communities.
By Kate Uptown - July 20, 2022