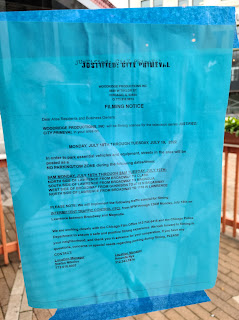 The FX limited series Justified: City Primeval, starring Timothy Olyphant and featuring Ravi Patel, will be filming Monday in the area of Lawrence and Broadway starting Monday morning. It's a sequel to Justified, which ended seven seasons ago.

Due to filming, there will be no parking from 9am Monday until 2am Tuesday:

Vehicles will be towed if they are still in place when filming begins, so move them -- the earlier the better.

Location managers are working closely with the Chicago Film Office (312-744-6415) and the Chicago Police Department to ensure a safe and positive filming experience. If you have any questions, concerns or special needs regarding parking during filming, please contact location managers Stefan Nikolov at 773-616-0007 or Amanda Nye at 312-343-1874.