Two Easters have come and gone, but we finally know what is planned for 4607 Magnolia, a beautiful house that the local block club, Magnolia Malden Neighbors Association, failed to save. We have been watching for signs of life at the currently empty lot, and a newly issued building permit shows that work is about to begin on construction of a new three story single family home.

As a reminder, here was the home that was demolished: 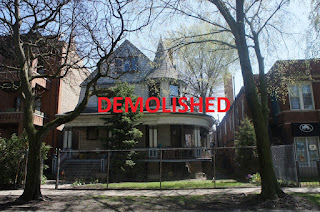 We covered this story previously when the historic home was for sale for over two years. Unfortunately, due to significant deterioration in the property, despite advocacy from Preservation Chicago and others, no one was willing to buy and rehab the home.

The truly unfortunate part about this is, according to Alderman Cappleman, there was a proposal in place to save the beautiful old home that failed due to one person's objections.

From what we heard from real estate agents and neighbors on Magnolia, the deal in place was to save and rehab the old home by allowing the construction of a three flat behind. The president of the local block club, Martin Tangora, refused to allow the upzone that would have made the save possible.

After the above comment was posted, neighbors wrote us to complain that Tangora failed to notify Magnolia-Malden neighbors about the proposal and failed to solicit any input from members of his block club area. From pre- and post-demolition conversations with residents who wrote to us, it appears many Magnolia-Malden neighbors would have been willing to accept the compromise deal in order to save the home. With no community input, the building appears to have been lost as a result.

The final sale was for half the initial ask ($412,000) and to a local resident.  Thankfully, the resident used a local "deconstruction" company (rather than straight demolition) to deconstruct the old building and save materials. That's about the only positive to this otherwise sad story.
By Keto Roc One - May 24, 2022