Free Outdoor Screening Of Monty and Rose 2, Plus A Talk By Its Director 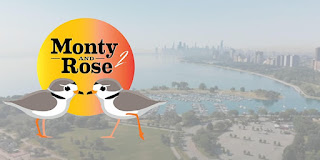 The Thursday screening was cancelled due to rain, and rescheduled to Tuesday, October 12th.
Monty and Rose 2: The World of Monty and Rose will be shown free of charge in a safe outdoor setting (the parking lot of the Uptown Branch Library at 929 West Buena) next Thursday, October 7th, at 6:30pm.

The feature-length film chronicles the lives of a pair of endangered Piping Plovers over five years and is a follow-up to the 2019 documentary short. The documentary chronicles these special birds and an unpredictable series of events including a proposed music festival that propelled them to national headlines.

Monty and Rose became the first piping plovers to successfully nest within the city limits of Chicago since 1948.

The screening at Uptown Branch library will take place outdoors in the parking lot--bring a chair! Director Bob Dolgan will be on hand for a Q&A after the film.

If you'd rather watch the documentary from the privacy of your home, you can stream it on Vimeo from $5.00. Click here to see it.