Alert readers yesterday messaged us to pass along news that the 7-Eleven location on Wilson had closed abruptly.  Workers were seen this morning boarding the location up. 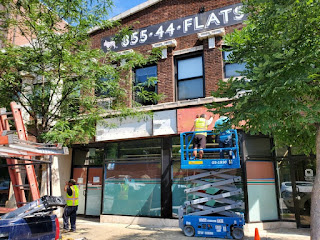 This 7-Eleven location was controversial when plans were announced in 2008, given the need to break a past moratorium on liquor sales and past criminal activity around the store location.  However, the location has been a decent neighbor and closure comes as a surprise.

In looking through online posts referencing the closure, it appears that new changes to the city's liquor laws came to affect the store.  Apparently, the change, coupled with the proximity to Truman College, led to the owners of this location no longer being able to sell liquor.  Given that liquor sales are a significant portion of the revenues for 7-Eleven's franchised stores, it appears that the corporate office pulled its support for the location.

We are currently in the process of trying to learn more about the liquor license change and how it will affect this location as well as the planned reopening of Nick's.

UPDATE: After contacting an attorney friend familiar with the city's liquor laws and this situation, it appears that the new moratorium addresses flavored tobacco sales proximate to a high school, not liquor.  Since Truman has a high school component, this location is affected.

It appears Nick's is NOT affected and another business at this location could sell liquor provided they obtain the proper licensing.  Will update as soon as we hear more.

UPDATE 2: Alderman Cappleman weighs in with additional information, stating that the owner of this franchise recently retired and corporate 7-Eleven could not find a replacement franchisee willing to take over with the tobacco limitation described above.

Although this location was not without controversy, it was ultimately a helpful spot for local residents who had late or overnight needs and was always a welcome presence for people walking back from the Wilson L late-night.

We sincerely hope that the space is filled soon with a similar business and will update as soon as we hear more.