The Aragon's Ground Floor Terra Cotta Gets Some TLC 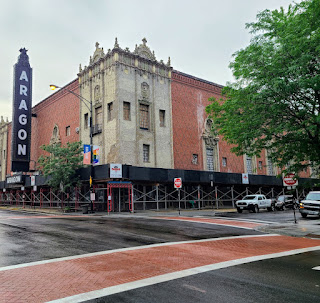 A building permit has been issued to the Aragon Ballroom (Lawrence and Winthrop) to stabilize the terra cotta pieces on the ground floor and identify loose ones. Pieces that are in jeopardy of falling off will be removed and labelled, presumably for later reattachment. The cost of the project is estimated to be $50,000.
The Aragon is nearly a century old; it opened for the first time in 1926.
In this photo you can also see the new scored walkways at the intersection, which will enhance pedestrian safety on a stretch of Lawrence where the stop signs have been long regarded as suggestions rather than places for drivers to make full stops.
By Kate Uptown - July 22, 2021