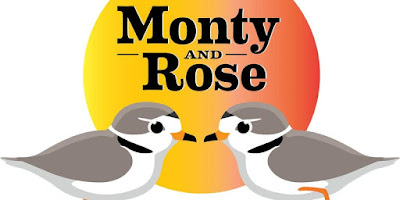 Attention, Monty and Rose fans! A documentary film that covers their entire story (so far) will be playing on the big screen in September, and tickets are available now.

Many of us enjoyed the 2019 documentary, Monty and Rose, which played to a sold-out crowd at the Music Box, on PBS, and at Uptown branch libraries.

Well, it's been expanded and supersized, and is now feature-film length. The new version goes back to the plovers’ hatching in western Michigan in 2017 and then brings the story up to the present (including portions of 2021).

Tickets are on sale NOW for screening at the nearby historic Music Box Theater. Screenings take place on Saturday, September 4 at 1pm, and on Monday, September 6th at 2:30pm. Ticket prices are $25 for the premiere, which will include a panel discussion afterward, and $20 for the second showing. A portion of proceeds benefit the education work of the nonprofit Great Lakes Flyway Project.

Buy tickets at www.montyandrose.net. (Don't delay. Remember it sold out the first time it played there.)

The feature-length documentary follows the story of the plovers and the hundreds of volunteers who have protected them. Against the odds, Monty and Rose have hatched 11 chicks on one of the busiest stretches of the busiest beach in Chicago.

Piping Plovers last successfully nested in Chicago in 1948. Their presence is the culmination of 20 years of habitat restoration activities at Montrose Beach Dunes, a state natural area on Chicago’s North Side, and the efforts of Great Lakes Piping Plover Recovery and Research.

Because of Monty and Rose, the Chicago Park District expanded the natural area at Montrose by 3.1 acres in April of this year. Due to market hunting and beach recreation, Piping Plover numbers declined from several hundred pairs around 1900 to just a dozen pairs by 1990. The goal is to restore their population to 150 pairs by 2050.