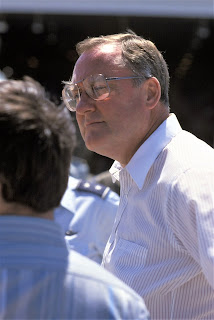 James R. Thompson, a four-term governor of Illinois who moved to Buena Park during the last eight years of his gubernatorial term, has passed away at age 84.

Gov. Thompson made headlines when he moved to 800 West Hutchinson Street in 1983, at a time Buena Park (and Uptown) were considered blighted areas. He said he needed more space to entertain, and couldn't afford a place in the Fullerton Avenue neighborhood of Lincoln Park, where he lived with his wife Jayne and their young daughter, Samantha.

His family bought the 4,000sf home for $455,000. The seller was Walter Clements, who led the drive in the 1970s to have Hutchinson Street declared an historic district.

Gov. Thompson said, "When I saw this house, it was love at first sight. I sat in the window seat in the dining room and made up my mind to buy it in 20 minutes."

To read an obituary of James R. Thompson, go here.