Wondering What's Up On Clark? 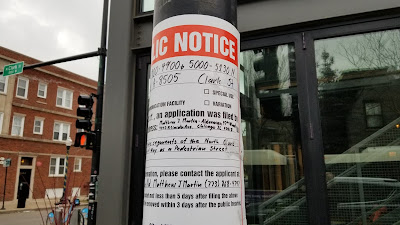 There have been a few questions about these zoning signs, which state the intention to have portions of Clark street designated as a "P Street" or "pedestrian street." The 4800-4900 blocks and area between 5000 and 5130 north are mentioned.

Pedestrian designation seeks to encourage pedestrian-friendly design of shopping corridors by banning certain uses that are detrimental to the pedestrian experience such as strip malls, drive-throughs, and vehicle sales and services. It also imposes certain design guidelines to encourage pedestrian traffic regarding shop windows, front setbacks, and entrances. Existing structures and uses are grandfathered in if this designation is put in place. A Pedestrian designation also reduces certain parking requirements for smaller businesses and extends eligibility for TOD-designation."

A few years ago, the area around Broadway and Lawrence was designated P Streets for the same reason.
By Sonny Side Up - February 04, 2020