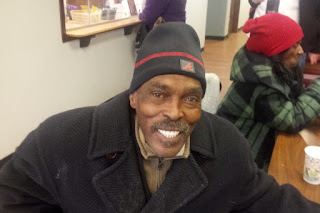 In Friday's Tribune, Mary Schmich writes about the life and death of StreetWise vendor Donald Lee.

While many of the locations identified as Uptown in the story are actually in Rogers Park, it is true that he frequented Uptown and attended and volunteered at Uptown Baptist Church.

Through his dedication to his job with StreetWise, he was able to gain stability in his life.  He became sober in AA, he got an apartment, he reestablished contact with his family in Georgia, and he even began taking music lessons.

Sadly, there's no happily-ever-after ending. Mr. Lee's body was found in Lake Michigan near Rogers Park in early October. The investigation and search for his cause of death continue.

His family has initiated a GoFundMe in order to return Mr. Lee's body to Georgia. If you have a couple of bucks you'd like to kick in, you can do so at www.gofundme.com/f/memorial-services-for-donald-lee.


In the to and fro of this big, busy city, it’s easy for a man like Donald Lee to live and die without much notice. But he will be mourned by those who knew he was more than he seemed to strangers rushing by.

“He wasn’t just a person you’d pass on the street,” says his nephew Everett Lee. “He was adored by the people close enough to appreciate him. We can’t make up for lost time, but we can show that he was loved. I just want him to be remembered as a person that was loved.”