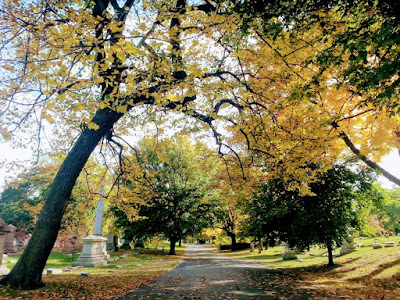 If you're looking for something a little different to do the next couple weekends, consider a late-autumn walking tour of Graceland Cemetery, in an intimate group of no more than 15.

"Hidden Stories at Graceland Cemetery" are sponsored by Atlas Obscura Chicago, and take place on Saturday, November 23rd and November 30th, from 11am-12:30pm. The cost is $20 per person and they can be booked here.

"Meet at Graceland's historic entrance for an in-depth tour of the most fascinating stories and monuments at the cemetery, presenting a unique view of Chicago (and American) history. Stories in the cemetery go far beyond the industrialists and "movers and shakers" who ended up with streets named after them. Though the tour will of course include the famous "Inez" and "Eternal Silence" statues, I’ll focus on lesser-known but equally interesting tales, some of which have never been published.

Though the route can vary from tour to tour, some of the stories here include Underground Railroad workers, a woman who funded the research behind the first birth control pill, a detective murdered by Jesse James, America's first known female spy, a man whose cause of death was listed as "brutality of policeman," a reporter who saw Einstein naked, and more. The stories will be endlessly fascinating and often hilarious."