"Castlewood Gorilla" Moves To A New Location After Years In Uptown 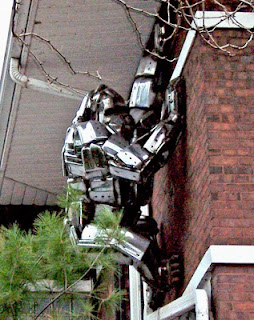 Even if the name John Kearney doesn't ring a bell, you've seen his work.

The Uptown-based artist passed away in 2014, leaving behind a plethora of sculptures and art that can be found in and around Chicago, as well as in major museums around the country.

But one work in particular puzzled one of his fans, reader Steven Scienski. What, he wondered, happened to the gorilla who perpetually climbed the side of a residence at 841 West Castlewood? When the home sold, the gorilla disappeared. Did it finally achieve its goal and get to the top of the house?

Steven researched it for a few months and eventually discovered that the Castlewood gorilla has made its way to Oakton Community College in Des Plaines, which has a brass indoor Kearney sculpture onsite as well. New frontiers and new walls to climb.

So if you're a fan of Kearney's, as Steven Scienski is, and you'd like to see a familiar sculpture in a new location, head over to the 'burbs and check it out. Eventually, Scienski would like to see a definitive listing of all of Kearney's work. If you're interested, let us know and we'll put you in touch with him.
By Sonny Side Up - August 31, 2019