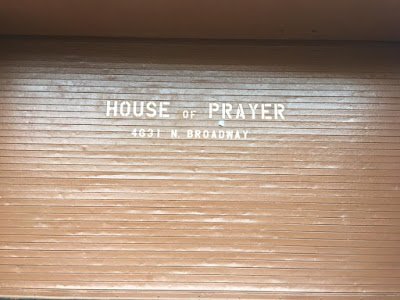 Regarding the request for a new liquor store at 4635 North Broadway, and the meeting about it tonight, we're amplifying some new information that a couple of readers brought up on UU's Facebook page.

One reader said, "Can a liquor store be next to a church?" and posted a photo of the sign for the church that's located in the building next door to the proposed new liquor store.

House of Prayer meets in the back of the building where Elim Wigs is, which would violate the city's traditional regulation that there can be no liquor sales within 100' of a place of worship (or a school, or a home for the elderly, or a homeless shelter).

Another reader posted in response:


"Regarding the proposed store's distance from the House of Prayer church: The folks at BACP [Business Affairs and Consumer Protection] spent some time walking me through the city's liquor licensing process because some laws at the state and city levels concerning the minimum distance from churches changed within the past year.

The store and church are too close for the applicant to receive a liquor license straight up; they would need to apply for an exemption, which the new laws permit.

The City's Liquor Control Commissioner can reduce the distance requirement if he concludes that the liquor store's close proximity would not detrimentally impact the church. Factors which the commissioner may consider include the size of the store and the size of the church, hours of operation, police and aldermanic input, and the measures the applicant proposes to maintain quiet and security.

These proposed measures would be incorporated into the applicant's plan of operation - which becomes attached to the liquor license and is enforceable by law."