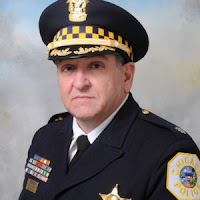 Commander Marc Buslik of the 19th police district (which includes all sections of Uptown south of Lawrence Avenue) is reaching the mandatory retirement age, so there will be a new commander for the district.

"I have promoted Lieutenant CHRIS PAPAIOANNOU to Commander of the 19th District. He previously served as the Commanding Officer of the Recruit Training Section of the Education and Training Division, overseeing day-to-day operations. He has also been in several supervisory positions within patrol, gun and tactical teams. He has a master’s degree in public safety administration from Calumet College of St. Joseph. He has 19 years of service."

Sean Loughran remains in command of the 20th District (including Uptown north of Lawrence).

There will be a retirement reception for Commander Buslik on May 13th; RSVPs required. We wish him the best and hope he enjoys the leisure time after 30 years on the force.

"Plans for the upcoming summer months are multifaceted. One strategy includes increased visibility along Chicago's lakefront, beaches and on Lake Shore Drive. Officers will also make patrolling busy parks and mass transit stations a priority. Bike patrols will also have a presence within the city's entertainment districts and other popular areas experiencing higher foot traffic due to the summer weather.

These increased patrols will rely on a combination of existing data and ongoing intelligence operations to deploy officers to areas in an effort to deter crime before it happens. In addition to beat officers, both the Summer Mobile Team and Saturation Team will supplement officers on the street with additional manpower as needed for the seasonal period from May to September."
By Sonny Side Up - April 30, 2019