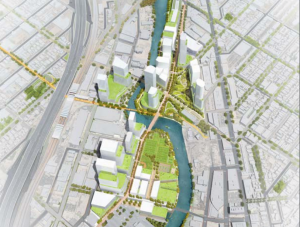 Ald. Cappleman has been all over the news lately -- not about the 46th Ward, but about a community that doesn't even exist yet.

As new chair of the City Council's powerful Zoning Committee, he's been active in shaping the plan for Lincoln Yards, the massive 55-acre development proposed for the North Side. (It's located near the river, at approximately Armitage and Clybourn, untilizing mostly abandoned industrial land.)

First, he requested, and got, developer Sterling Bay to agree to double the number of on-site affordable housing units, from the required number, 300, to 600.

Then, yesterday the Zoning Committee was set to vote on final approval of the plan. Both mayoral run-off candidates, Lori Lightfoot and Toni Preckwinkle, had asked Ald. Cappleman to delay the vote until after the mayoral election. Citing those requests, as well as new tweaks to the plan made just two days earlier regarding building height and density, Ald. Cappleman moved to delay the vote.

But other members of the committee, led by Ald. Walter Burnett (27th), voted to override Ald. Cappleman's attempt to defer the vote.

Of course, this being silly season, a/k/a election time, there were statements criticizing Cappleman after the meeting, made by people who wanted him to do exactly what he'd just done: demand more on-site affordable housing, and request a delayed vote.

The next hurdle for Lincoln Yards will come on Monday in front the 35-member Finance Committee, where TIF approval will be sought. The only Uptown connection there is the presence of Ald. Osterman on the committee.