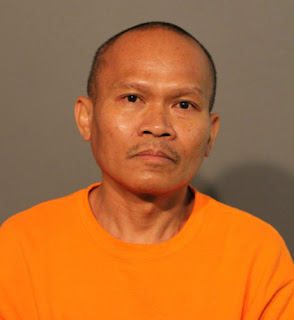 A cold case involving the sexual assault of minors is heating up, and the police are looking for more information from the public.

In the period between 2000 and 2002, two children were allegedly sexually abused in a classroom at the Wat Phrasriratanamahatatu Chicago Buddhist Temple, at 4735 N Magnolia (one block directly west of the Pancake House).

Police say the abuser is Sripai Biadnok, a Buddhist monk who taught Thai language and culture at the school. The minor victims took classes at the school at the time of the alleged assaults.

According to CWBChicago, Biadnok was arrested recently in Las Vegas and has been extradited to Chicago to face charges. He is being charged with Predatory Criminal Sexual Assault and Aggravated Criminal Sexual Abuse.

The police are looking for information and other possible victims. At the time of the alleged Uptown assaults, Mr. Biadnok was in his early 30s, had a slim build, a height of 5' to 5'2", with black hair (shaved), and brown eyes.  He wore the traditional orange robes of a Buddhist monk.

The alert released by the police says, "If you have any information/questions about this incident or any other incident involving the subject of this alert, call the Special Investigations Unit at (312) 492-3810."
By Sonny Side Up - February 19, 2019