DUI Strike Force To Be In 19th District Saturday Night 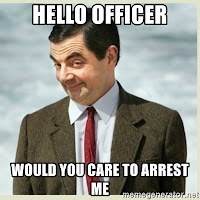 It's obviously never a good idea to drive under the influence, but Saturday is a particularly bad choice to do it, because the CPD's DUI Strike Force will be out in the 19th District (Fullerton to Lawrence, the lake to the river).

In addition, the Breath Alcohol Testing (BAT) Mobile Unit may also be deployed to allow officers to expedite the process of charging a person with Driving under the Influence (DUI) prior to transporting an alleged into the nearest lockup for bonding. The mobile unit also allows for Individual Recognizance Bonds (I-Bonds) to be issued at the site of the DUI Strike Force Patrol."

A couple of weeks ago, the Strike Force was out in the Jefferson Park District, and wrote 111 citations and towed four vehicles. That included three DUIs. Others violations were issued for seatbelt use, lack of insurance, unsafe vehicles, and drivers license violations.
By Sonny Side Up - February 23, 2019