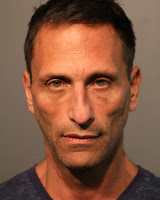 Heath A. Levey, age 51, has been charged with two felony counts of Hate Crime and three misdemeanor charges of Criminal Deface of Property. He is alleged to have drawn chalk swastikas on several homes near his residence in Buena Park last week. He lives on the 4200 block of North Clarendon.

He will appear in bond court at 26th and California this afternoon.

The police released this information this morning:

"Health Levey, 51 was taken into custody after being identified from home surveillance footage as the individual who drew a Swastika symbol (an emblem of the German Nazi Party) and other graffiti on the properties located on the 800 block of West Hutchinson on November 2 between the hours of 1:00PM and 3:30PM.

The offender will appear in court today. No further information is available at this time."

Update: More disturbing news about this man from Crime in Wrigleyville. Exclusive: Jewish Uptown man accused of hate crime for drawing swastikas last week was accused of threatening a woman before 2016 election — "I'm going to rape you, you f*cking Republican!"
By Sonny Side Up - November 09, 2018