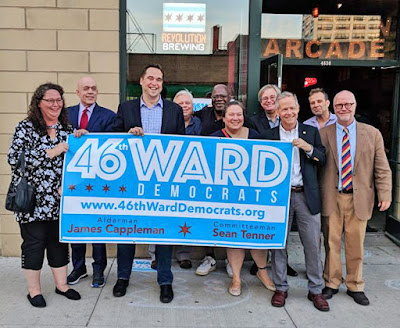 Ald. Cappleman has announced he's stepping down from his position as 46th Ward Democratic Committeeman. In a statement released on Wednesday, he welcomed Sean Tenner as his successor:

This 2018 election is of absolutely historic importance.  We need a Democratic Congress in Washington to block the incredibly dangerous Trump agenda.  We need to elect JB Pritzker to end Governor Rauner’s endless attacks on working families, unions, and social services and start moving our state back in a more progressive direction.

At the same time, there are also numerous projects I am working on critical to the future of the 46th Ward  – such as the long-awaited redevelopment on the historic Uptown Theatre and initiatives related to public safety, schools, housing, infrastructure and transportation.

I want to devote as much time as possible to addressing these critical ward issues, and I know that Sean has the experience and energy to lead the 46th Ward Democrats going in to the fall campaign and beyond.

This is a win-win for the 46th Ward and the Democratic Party.  I look forward to working with Sean, a friend I have known and worked with since my first campaign, to make our community, state and nation more fair and just for people of all backgrounds.

If you're wondering who your ward's Republican and Democratic committeemen are, here are links: