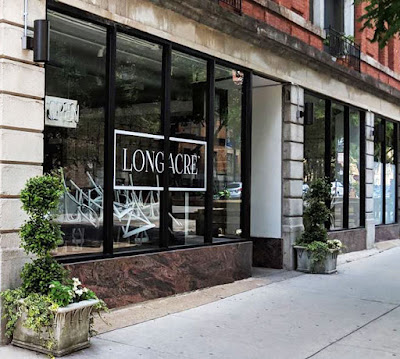 After a springtime soft opening and using the knowledge gained from that to work out staffing and logistical issues, LONGACRE RESTAURANT will hold its Grand Opening on Friday, July 6th.

"Longacre restaurant will continue local owners Gina and Andy Kalish’s commitment to contributing to the revitalization of their Uptown neighborhood with the grand opening of their third spot on July 6th. Located at 1309 W. Wilson Ave, Longacre follows the husband-and-wife owners’ fast-casual, plant-based hot spot, Kā’lish, which opened in November of 2016 and Longacre Pizza Squared—the precursor to Longacre’s dining room, which opened in the fall of 2017.

“For us, it is all about creating a gathering space for our neighbors, while being cool and delicious enough to attract Chicagoans and travelers alike,” says Gina Kalish. “Our Detroit-style pizza has become a carryout destination in the neighborhood, and we’re excited to introduce our expanded menu at Longacre”.

Named after the “long” acre of property their Harbor Country Michigan home stands on, Longacre is a representation of Gina and Andy’s culinary journey. From time spent in Michigan and Chicago to Gina’s upbringing in Mexico City, Longacre’s menu selection incorporates many of the Kalish’s food favorites. Offerings will include soups and salads, sandwich boards, local craft pasta and dinner plates, Longacre’s famous Detroit-style pizza and house-made desserts. Brunch will also be available every Sunday.

As a nod to their loyal following at Kā’lish and desire to promote plant-based dining options, all of the squared pizzas can be made (VgO) vegan friendly with nut cheeses and faux meats that Longacre makes in-house.

“Long before Detroit was hip, it was my hometown,” says Andy. “It is a mighty, resilient and very cool place, much like Uptown. Bringing a bit of the Motor City to our neighborhood is my way of celebrating my past in my new hometown”.

Inspired by the first restaurant the Kalish’s opened 20 years ago in Uptown, The Earth Market, Longacre’s weekend brunch is all about bounty with big plates of delicious foods. “This time of year, most of our produce is local and our meats come mostly from Indiana,” says Kalish. “Local foods make for the best meals.”

Throughout the brunch menu, you will find influences of Andy’s Michigan upbringing with the Frankfurt Skillet Cakes or Gina’s hometown of Mexico City with the Chela-quiles. For brunch, Andy and Gina will revive old favorites including The Big Messy, a sizeable biscuit with eggs, bacon, horseradish cheese sauce and a piquant pico de gallo.

Longacre’s dining room seats 50+ guests in its modern indoor space, while the dog-friendly patio—an intimate and verdant garden—seats an additional 30 guests. The new restaurant will be BYOB until it has its liquor license.

For more information, please visit https://www.longacrechicago.com/.
By Sonny Side Up - July 05, 2018