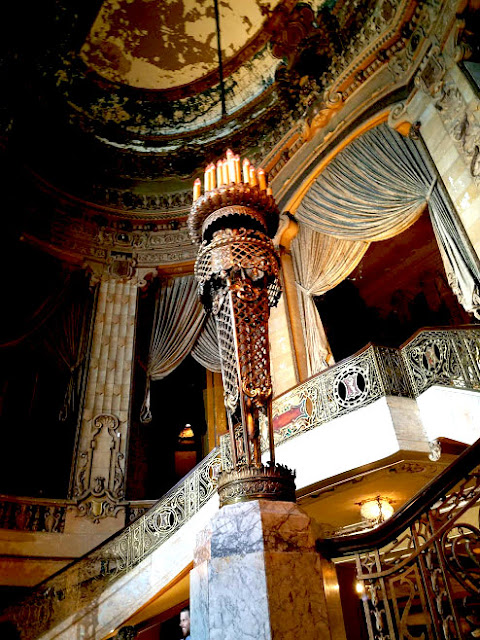 Right as a press conference took place inside the Uptown Theater, the city released news about plans for the theater's future:

Mayor Rahm Emanuel today joined Ald. James Cappleman, Jam Productions and Farpoint Development to announce Chicago’s historic Uptown Theatre will be restored and reopened as the crown jewel of a revitalized Uptown entertainment district. The 93-year-old landmark building, vacant for more than 35 years, will be used for a variety of live performances and special events. The $75 million project fulfills a commitment the Mayor made in his first term.

“The Uptown Theater has been a staple of the Uptown neighborhood’s past, and will be a strong asset for the community’s future,” Mayor Emanuel said. “The restored theater will be the centerpiece of the new, revitalized Uptown entertainment district, giving residents and visitors another way to experience world-class culture and entertainment in one of the City’s most storied neighborhoods.” 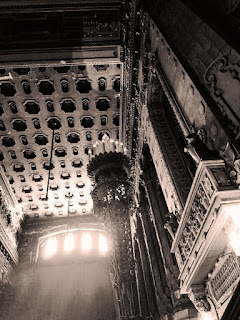 The joint venture between Jam, one of the Chicago’s area’s largest concert promotors, and Farpoint, an experienced Chicago-based real estate developer, will comprehensively restore the Spanish Revival-style building as modern entertainment venue. Interior improvements will include new elevators and concession stations, new mechanical, electrical, plumbing and life-safety systems. Restored decorative finishes, new seats and a reconfigured first-floor will increase total capacity from approximately 4,100 to 5,800 people. Exterior work will repair the building’s masonry and terra cotta and improve marquees and related signage, among other repairs and improvements.

In addition to the redevelopment project, a comprehensive streetscape plan will help identify the urban entertainment district around the Uptown and Riviera theatres and the Aragon Ballroom. The $6 million project includes improvements to portions of Broadway, Lawrence, Wilson and Argyle, with a new pedestrian plaza, sculpture and public stage on the 4700 block of North Racine. Streetscape construction will be finished this summer.

“We have assembled an all-star team with Farpoint Development to reopen the doors of one of the most amazing live entertainment palaces in the country,” Jam owner Jerry Mickelson said. “This opportunity represents more than just restoring a theatre since this rejuvenation will create an immense economic impact on Chicago’s North Side. The Uptown Theatre will be the catalyst to spur development in the Uptown Entertainment District that will help create jobs, attract restaurants along with commercial and retail establishments as well as other entertainment venues.”

“Farpoint Development could not be prouder than to partner with Jerry Mickelson and Jam Productions in the renovation of the Uptown Theater,” Farpoint founder Scott Goodman said. “Opportunities to restore architectural gems like the Uptown are rare. To be able to do it in a diverse and flourishing neighborhood like Uptown makes it that much more exciting.”

Planned City assistance for the theater restoration includes $14 million in PACE financing, $13 million in Tax Increment Financing and $3 million in Adopt-A-Landmark funds. The PACE funding is being made available through the State of Illinois’ Property Assessed Clean Energy Act, which enables building owners to make energy-related building improvements that are paid over time through special assessments on the property.

Additional funding sources are anticipated to include $30 million in equity and conventional financing, $10 million in Build Illinois Bond funding, and $8.7 million in federal tax credits.

With “an acre of seats” served by three separate lobbies, the Spanish Revival-style structure was the world’s largest theater building when it opened in 1925 at 4816 N. Broadway. Designed by architects Rapp and Rapp for operator Balaban and Katz Corp., the Uptown was used for stage shows, movies and special events into the 1970s, when it was primarily used for touring musical acts. Since closing to the public in 1981, the building’s interior spaces have been periodically used for film productions.

The City of Chicago has worked to protect and preserve the building for several decades. In 1991, it was designated a City of Chicago landmark to preserve its exterior and interior from alteration or demolition. In 2001, the Lawrence/Broadway TIF district was designated to help fund repairs and maintenance, for which $1.4 million has been allocated to date. In 2005, the City established a compliance agreement with a former owner that ensured the structure would be maintained and monitored through regular engineering reports and court dates. The compliance agreement continues to apply to its current owner, Jam, which purchased the building in 2008.

Redevelopment agreement details will be finalized this summer and presented this fall to the Commission on Chicago Landmarks, the Community Development Commission and the Chicago City Council for review and approval. Restoration work would start later this year and be completed in 2020. 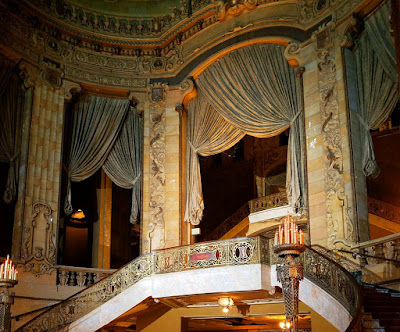 “Given its past, size and potential impact on the City’s cultural landscape, the Uptown will be one of the most significant restoration projects in the city’s history,” said Department of Planning and Development Commissioner David Reifman. “It’s reopening will introduce hundreds of thousands of people to one of Chicago’s great performance spaces, as well as one of its most historic neighborhoods.”

A partnership between Chicago Public Schools and After School Matters will provide students with opportunities to visit the theater during and after construction as part of field trips, special events and fine arts classes.

Public transit access to the theater will be enhanced by the $203 million renovation of Uptown’s Wilson Avenue CTA station and the planned renovation of the Lawrence and Argyle CTA stations, part of a $2.1 billion initiative to expand the North Side capacity of the CTA’s Red and Purple lines.

In the ’20s and ’30s, the Uptown neighborhood’s entertainment venues could accommodate 25,000 people, making it the largest entertainment district in Chicago outside of the Loop, according to the Commission on Chicago Landmarks, which in 2016 coordinated the area’s designation as an official landmark district. Uptown entertainment venues today include the Aragon Ballroom, Riviera Theatre, Green Mill jazz lounge and Uptown Underground cabaret.

Other nearby public and private projects include recent renovations of the 1920s-era Gerber Building and Lawrence House, and more than 1,800 new and rehabilitated, mixed-income residential units planned for Broadway, Lawrence, Wilson, Kenmore and Clarendon avenues.
By Sonny Side Up - June 29, 2018