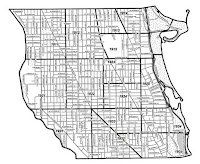 Today it was announced that 108 new police officers have been deployed into the districts after graduating from the academy and undergoing three months of field training.

Of that number, nine will join the 19th District, which covers Uptown south of Lawrence Avenue.

They join the 19 new officers who joined the 19th District in March.

The twitter feed for the district says, "This a great place to work and a great community to work with. We hope that you’re all Cubs fans..."

The city says that new officers will be deployed to districts each month into 2019.
By Sonny Side Up - April 29, 2018