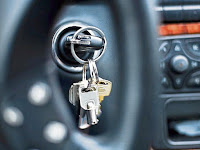 Please, neighbors, use your street smarts and don't leave your car running unless you are sitting in the driver's seat.

About the Crime:
This alert gives notice of recent Motor Vehicle Thefts that have occurred in the 19th District. In each incident, the offender(s) wait until the victims leave their vehicles unattended with the engine running before getting in and driving away. Vehicles are being left running and unattended while victims are patronizing stores, paying for gas, delivering goods, or warming up their vehicles. Incidents are occurring during daytime hours on and around Irving Park Road. The suspects drive a dark colored sedan.

Incident times and locations are listed below:

In a subsequent community alert, the same thing is happening around Lincoln Avenue, and the suspects are driving a dark colored sedan:
What you can do: