The past year has been especially exciting with the completion of major projects that have helped transform the 46th Ward. We've not seen this type of renaissance in generations, and it took many years of planning to get us where we are today. There has been a lot of dust and many road closures along the way, but much of that is now over and we can enjoy the benefits.

Some of the new businesses are: 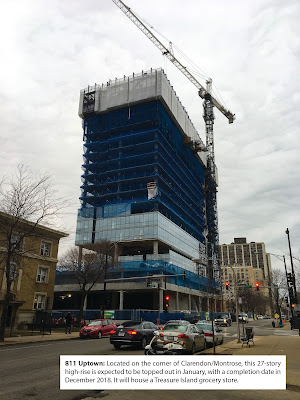 PROJECTS WITH A PROPOSED 2018 START DATE

HOMELESSNESS.  In 2016, I successfully pushed for a housing-first model of care to address the encampments located under two Uptown viaducts. A total of 75 people received housing, some for the first time in many years. In 2017, the Center for Urban Research & Learning out of Loyola University created a report entitled The Encampment that documented the experiences of the people who were housed during this pilot project in an effort to learn from their stories. One person who had been living in a tent for a long time remarked, “I feel at home, finally. I mean, I can stand up without having to bend over the side of the tent. I can actually go to the bathroom. You know I can cook some food, besides firing up the grill.” I continue to work with my colleagues and advocates to make the Housing First model a priority in Chicago.