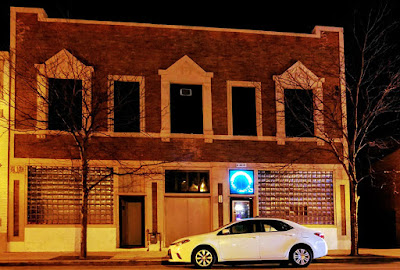 Man's Country, the legendary bathhouse and former entertainment complex at 5017 North Clark, will close its doors forever on the first day of 2018. To honor its 44 years of indulgence and celebration, it is hosting a 13-hour New Year's Eve party and going out with a bang.

According to the promo materials, "LOOSE ENDS celebrates the life of this historic gay bathhouse by welcoming all genders and gender non-conformists to a 13-hour disco party with full access to all 3 floors."  You can buy tickets here. Festivities begin at 11pm on December 31 and end at noon on January 1.

And then the doors will close on Man's Country.

In 1972, Chuck Renslow was looking to buy. He'd already made a name for himself as a publisher and nightclub owner. Now he was looking to create a bathhouse for Chicago that would rival New York's Continental Baths.

He found two enormous side-by-side buildings in the Swedish enclave of Andersonville. One dated back to 1907, when it was Verandi Hall, home to a lodge/fraternal organization. Even as late as the 1960s, it was still in operation as a restaurant and events hall, where ladies' clubs and church groups met.

With the advent of the AIDS crisis in the 1980s, business took a hit and Renslow added a dance club to the bathhouse to bolster profits. According to The Advocate, "Acts like Boy George, the Village People, the Manhattan Transfer, the company from Porgy and Bess, and Divine, in what turned out to be his final show, performed there."

As the years went by, the dance club closed, customers returned, and Man's Country soldiered on. Scenes in the gay-themed Christmas movie Scrooge & Marley were filmed there in 2012. But the glamor waned, and according to The Advocate, the club hadn't turn a profit for its last six years. The reviews (and photos) spoke of shabbiness and deferred maintenance, and in October 2016, Chuck Renslow, who was 87 and still coming to work, told his employees he had put the building up for sale. 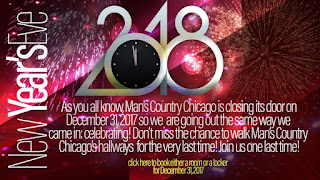 In June 2017, Mr. Renslow passed away. The management and ownership of the club fell to his long-time partner, Ron Ehemann. A deal to sell the building was reached this past autumn.

So what will happen now? As Chuck predicted, the new owner plans to put condos on the site. In a nod to its past, the new building will be named The Renslow.

We checked with Ald. Pawar's office and were told that there have been no official plans submitted by the developer, but that they are expecting to receive them soon.

The owner of Full Kit Gear, the leather shop on the ground floor, issued a press release on December 15th that says,


"With the announced closure of Man’s Country and the pending sale of the two buildings at 5015-5023 N Clark Street, there have been many rumors regarding the future of Full Kit Gear. Full Kit Gear has a very long lease and anticipates being at 5021-23 N Clark Street for many years to come.

Having Full Kit Gear come to Chicago and become part of the local community was very important to Chuck Renslow. Ron Ehemann, Chuck Renslow’s long time partner, current owner of the buildings, and Trustee of the Renslow Family Trust states:

'From the time Chuck and I decided to sell the buildings, it was very important to us that FK stay put to serve the community we so love. We negotiated to make sure of that in the sale of the buildings, and the new owners have committed to that as well. Full Kit Gear will remain here, as part of the community, and as part of Chuck’s legacy for many years to come.'"

For more information about Man's Country, we suggest: