Update: A suspect has been identified and charged with the crime. He is Karon Cannon, age 24, of the 1300 Block of West Roosevelt. According to the police,

"Cannon was positively identified from surveillance video as the offender who robbed a 70-year-old man of his personal belongings. Cannon approached the victim on the sidewalk, punched him in the face, knocked the victim to the ground, and struck the victim with a dangerous weapon. Cannon then took the victim's personal property. The 70-year-old male victim sustained injuries to his head and was treated and released from IL Masonic Hospital in good condition. Cannon was identified through surveillance footage and was taken into custody on October 18th, 2017 at approx. 9:20pm and charged accordingly." He is due in bond court on Friday, October 20 and is charged with two felonies.

Original post:  This did not take place in Uptown. We are posting it so Red Line riders can be aware of the alleged criminal's face and description. Please call the numbers on the flier if you recognize him or can help with the investigation. 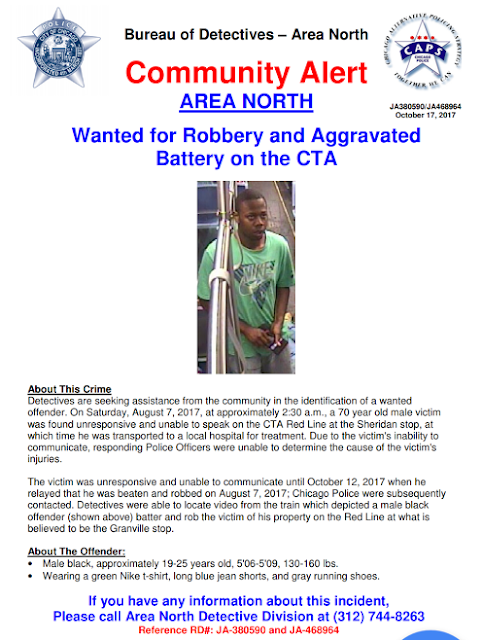