Wilson Men's Hotel Has Been Sold 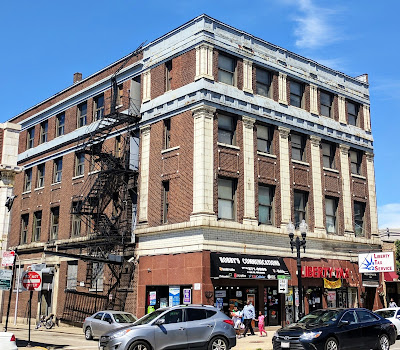 Uptown Update has learned that the Wilson Men's Hotel, 1124 West Wilson, has a new owner.

Owner Jay Bomberg has sold the building to a subsidiary of City Pads, the apartment rental company that has made several recent acquisitions in Uptown and Edgewater, including 4022 Sheridan, 6145 Broadway, and the Hazelton Apartments at 851 Montrose. We are told that the purchase took place after the buyer and seller complied with the conditions of Chicago's 2014 SRO Ordinance.

Bomberg Property Management has owned the building for the past ten years, acquiring it in 2007 for $3,450,000. The name was changed from Wilson Club Men's Hotel that same year.

The previous owner was Sean Derrig, who bought it in 1998 for $1,550,000. We don't have any information (yet) on the recent transaction's sales price.

The sale shouldn't come as too much of a surprise to anyone who has been paying attention. Bomberg Property Management has been divesting its portfolio of its Uptown properties, including the Bachelor Apartments (1136 Wilson) and Wilson-Windsor Apartments (915 Wilson).

At the request of the owner, alternative uses for the building were explored by a local architecture firm in 2012. Bomberg Property Management listed the hotel for sale in 2013 and then again in 2015.

It is unclear how many residents currently live in the hotel. It has 256 cubicles, and two commercial ground-floor retail spaces, rented by Liberty Tax Service and Robby's Communications.

We are told that the new owners have hired an on-site case manager to help current residents find new housing and to connect them with support in the form of social services and/or family. Under the SRO Ordinance, they will also receive $2000 each to assist them with moving expenses.

The 112-year-old Wilson Men's Hotel is one of two remaining "cubicle hotels" in Chicago. Due to grandfather clauses, it has been allowed to offer rooms that do not comply with current city codes.

There are 85 cubicles on each of the second, third, and fourth stories of the building. Some of its cubicles are separated by partitions topped with wire fencing.

Many of its rooms are smaller than 50sf (current code requires a minimum of 70sf) and the majority are windowless. There is no air conditioning and little cross-ventilation on the residential floors. (One of the reasons the room roofs and wall partitions are made of wire fencing is to promote airflow).

In the 1920s and 1930s, it served primarily as a home for itinerant and seasonal laborers. By the 1970s, rooms rented for around $1.75 a night, and it attracted men "down on their luck," according to photographer Bob Rehak, who describes it through photos and words. Rooms currently rent for less than $100/week.

The Wilson Men's Hotel and the Ewing Annex, Chicago's other surviving cubicle hotel, have long been lightning rods for housing activists. Some see them as links to Chicago's history and as two of the few remaining places where men suffering extreme poverty can afford to stay. Others find the living conditions inhumane, citing bed bugs, constant noise, overcrowding, unsafe conditions due to outdated building codes, and fire hazards.

There have been changes to the Wilson Men's Hotel over the past decade. The building had been in Housing Court, but improved to the point that it was no longer required to appear. Extreme conditions which led to the deaths of two men during 1995's heat wave have been addressed. Pipes, electric wiring, and windows were replaced. In 2013, Inspiration Corporation and DFSS brought in a full-time social worker who offered assistance to those wanted it. An air-conditioned community room was opened, as was a first-floor kitchen.

Now the building will enter a new phase, one that was not brought about by activists, housing ordinances, or building codes -- but by the free market.

It will be interesting to watch what the future holds for this 112-year-old building that has seen so much of Uptown's history.


Update: City Pads has released a statement about the future of the hotel. Read it here.
By Kate Uptown - July 19, 2017