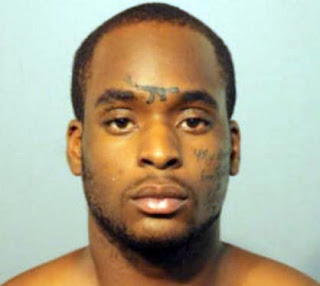 Long-time readers may remember August 2013, when several horrific shootings happened along Wilson Avenue. In the first, on August 19, five men between the ages at 21 and 58 were shot on the steps of Uptown Baptist Church while waiting in line for food. One man, 21-year-old security guard Darius Oliver, died of his injuries.

Two weeks later, and two blocks away, three more people, including a 14-year-old boy, were shot at Broadway and Wilson, near the currency exchange.

Both shooting incidents were classified as gang-related, although not all the victims were in gangs.

By September, a man was in custody for the Broadway/Wilson shooting, and by November he was charged with both incidents. His name is Kelsky Patterson, and he was 21 years old at the time. He was immediately noteworthy not only for being a one-man crime wave, but also for the AK-47 tattooed on his forehead.

His case has been winding its way through the court system. Today we heard from a 19th District Court Advocate about what happened:


"Today was Kelsky Patterson's sentencing. It was a surprise to have his case wrap this quickly. He was on trial for murder and aggravated assault. He asked for a jury trial. The jury was selected Monday and opening statements were read. Today everyone was back in court.

Last night he asked for a plea bargain. His attorney and State's Attorney Joy Repella of the Community Justice Center worked out 20 years for the murder. It was accepted by Judge Linn. There is no 'good time' available in a murder plea. He must serve all 20 years in prison.

Then the second case was heard by Judge Stephenson. She gave him 9.5 years for Aggravated Assault. He must serve at least 85% of that sentence. It is unusual in that his sentencing will run consecutively, not concurrently.

He will serve a minimum of  28 years for his actions during that two-week period in 2013. He has been in jail with no bond from the time he was 21. He will serve more time in prison for his crimes than he has been alive.

After he gets out around 2041, he will be on supervision for three years.

It was an emotional case. Relatives of the victims were at every hearing and court date since it all started back in 2013. The State's Attorney's Office told us they were very pleased with the verdict.

No gang members were in court to support Kelsky Patterson. He threw away his life -- and others' lives -- for them, but he'll serve his sentence alone."