That Was Quick. TCF Bank Robbery Suspect Arrested By FBI 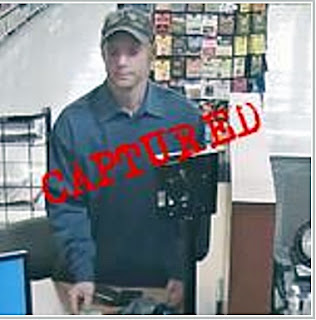 If the charges against this alleged bank robber are correct, he had an eventful month of May.

Eric Hanson, 34, is accused of robbing two Lakeview Byline Banks and one Uptown TCF Bank within six days. The TCF at Montrose and Sheridan was robbed last Thursday afternoon.

Now the FBI has a big red "CAPTURED" stamp plastered on the photo of the suspect.

According to Crime in Wrigleyville, the FBI was tipped off by two of Hanson's former classmates who recognized him from bank camera photos. Not hard, actually, since he didn't attempt to disguise himself even a little. He had sunglasses with him, but left them propped on his hat.

CWB goes on to say that when the FBI checked out his Facebook page, he had posted photos showing off a new neck tattoo -- identical to the one that one of the tellers had described the bank robber as having.

Read the whole story here at Crime In Wrigleyville + Boystown.
By Kate Uptown - May 23, 2017