Shots Fired This Afternoon On Eastwood 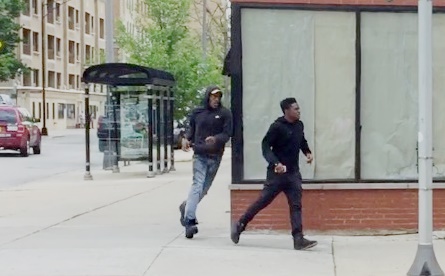 There were shots fired this afternoon on Eastwood Avenue, coming from shooters on Sheridan. A reader took this video and says, "I happened to be taking recycling out. These two ran by and apparently threw a gun on the roof of the Ace hardware on Broadway and Leland.

The police have this video and were looking for the two and recovering the gun at the moment."

It's entirely possible that these guys were running away from shots fired. Most reasonable people would. We questioned the reader, who said that when s/he was speaking to the police and showing them the video, other eyewitnesses were confirming to the police that the men on the video were those who fired the shots and threw the gun on top of Ace Hardware. According to the eyewitnesses, they got rid of the gun when they heard police approaching.

A reminder: Unless they are arrested, charged, and tried in a court of law and found guilty, they are presumed to be innocent.

The People's Music School is on Eastwood, east of Sheridan, on the exact block where the shots ended up. Whoever the shooters are don't even care about kids getting music lessons. It's all about stupid gang "logic," and if someone, even a kid, gets shot, do they even care, as long as they can avenge something posted on social media? It's a damn shame.
By Kate Uptown - May 22, 2017