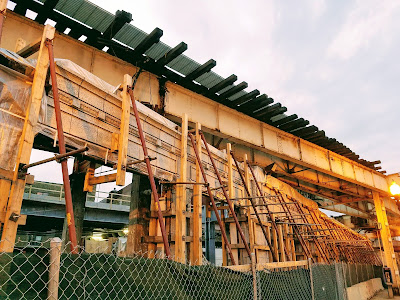 "Gerber Building at CTA's Wilson Station Being Restored to Jazz Age Glory." That's the title of a new story by the Tribune's transportation writer, Mary Wisniewski, about the rehab and restoration of the Gerber Building at the Wilson Red Line stop. It cover the history of the station, and Uptown, and explains what the CTA's plans are for the new version of the station, due to be completed by year's end:


The project will bring back the parapet, to be remade with glass fiber reinforced concrete, along with a new electric clock, [CTA architectural historian Marlise] Fratinardo said. The CTA will install something similar to the old globe light fixtures, and new, architecturally compatible storefronts and doors.

As for the terra cotta, the CTA cleaned and assessed each piece. In some cases, the pieces were too deteriorated to keep, and the agency is having them refabricated at one of the few remaining terra cotta companies, Gladding, McBean in Lincoln, Calif., Fratinardo said.