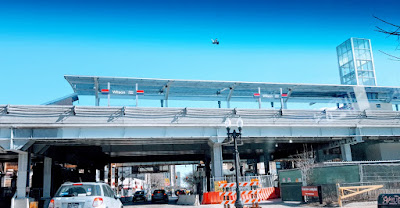 Final phase! The Mayor showed up for a press conference at the Wilson L today to talk about its progress. The press release from the city is below. We can't wait for the end of the year, when three-plus years of construction is completed. We especially anticipate the first ADA-compliant station in Uptown's history.

Mayor Rahm Emanuel and Chicago Transit Authority (CTA) President Dorval R. Carter, Jr., today announced the Wilson Red Line Station Reconstruction Project is kicking off its final major phase of construction. Already more than 75 percent complete, the $203 million project is on track to deliver a modern, fully accessible station and improvements to century-old tracks by the end of this year.

CTA trains will for the first time operate on all brand new elevated tracks in Uptown this Monday, as demolition begins on the last of four old elevated tracks that were built more than a century ago.

“When this project is completed, CTA customers will have a modern, accessible station in the heart of Chicago’s Uptown that will provide better service and also help generate economic development in the historic neighborhood,” said CTA President Dorval R. Carter, Jr. “We are pleased to see the finish line for the new Wilson station and I thank our customers and Uptown neighbors for their patience during this worthwhile project.”

“All the developers and new business owners who have come into this area in the last year have said that it was the rehab of the Wilson ‘L’ that attracted them to Uptown,” said Ald. James Cappleman. “If there ever was a case study for what the rehab of an L stop can do, the Wilson ‘L’ is it.”

The Wilson station will remain open during the remaining construction and customers will see no changes to Red and Purple Express service.

Announced by Mayor Emanuel in 2012, the project is building a brand new Wilson stationhouse with an elevator and restoring the historic Gerber Building, built in 1923 at Broadway and Wilson.

It is also replacing more than a half mile of what was more than 100-year-old elevated track structure. Once the project is completed, the station will also function as a new Red-Purple Line transfer station for customers.

To date, the CTA has completed the reconstruction of two southbound tracks that carry Red and Purple Line Express trains as well as the northbound Red Line track. Work crews have completed one of the two new, modern island platforms that replaced platforms and infrastructure that were nearly 100 years old.

Wilson is just the latest in a series of major modernization projects undertaken by Mayor Emanuel on the Red Line, the CTA’s busiest rail line that forms the backbone of Chicago. Other Red Line projects since 2011 include the Red and Purple Modernization Program, the new 95th Street Terminal, and the extension of the Red Line south to 130th Street.