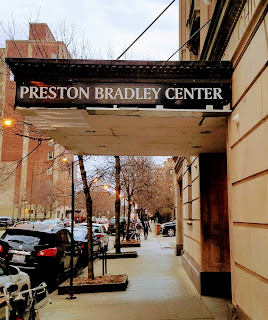 To celebrate the circumstances that allowed it to stay open, and to show off the newly upgraded facility, North Side Housing and Supportive Services is holding an Open House tonight at its Men's Shelter at the historic Preston Bradley Center, 941 West Lawrence. You are invited to visit between 5:30pm and 7pm.

As you may remember, the board of NSHSS had made the hard decision last September to close the shelter at the end of 2016 due to funding woes. By late December, the staff had been laid off and all but two residents had been transferred to other facilities when a holiday miracle happened.

A generous donation from the Reva and David Logan Foundation just two days before the shelter was due to shut down came through. That donation will allow the shelter to remain open for at least another three years. That was great news for the men who seek help there, for the staff who were laid off, and for the Preston Bradley Center, which would be losing a large part of its annual income received via rent from the shelter.

"This event will give us an opportunity to thank our friends and supporters and to showcase major renovations that were undertaken since the holidays," said Richard Ducatenzeiler, NSHSS's Executive Director.

The shelter is open every night of the year and can serve up to 72 homeless men per night. Last year, 320 different men spent a total of 18,000 nights there. In addition to the men's shelter, the agency also provides case management, permanent supportive housing, and other services for the homeless.

Thanks also go out to Bridgeview Bank for contributing $25,000, which went for painting of the shelters walls, new flooring, new folding tables, and 72 new industrial steel lockers.