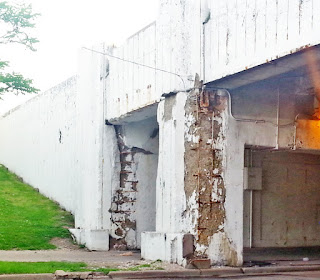 The Lake Shore Drive overpasses at both Wilson Avenue and Lawrence Avenue are included in a list of the ten most structurally deficient bridges in the state, based on the amount of traffic they handle. Super!

Built in 1933, they are the oldest spans on the list, which includes four other overpasses in Cook County, two in DuPage County, and one each in Will and St. Clair Counties.

This is no surprise to anyone. According to the American Road & Transportation Builders Association, which compiled the list, both bridges were found to be "Structurally Deficient" in 2015 and 2014 as well as 2016. The Illinois Public Interest Research Group held a press conference at the Wilson overpass in 2011, declaring it to be structurally deficient at that time.

Then of course, there were the heavy chunks of concrete that came raining down on the sidewalk and street beneath the Lawrence overpass in the summer of 2015, one of them 15 feet long. If anyone had been walking or driving there at the time, they wouldn't have had a chance of survival.

Uptown Update has posted about this situation many times, beginning in 2008. You can see the chronology of the decaying overpasses here.  In the nearly ten years that Uptown Update has been in existence, we've seen it happen over and over -- the powers that be acknowledge that the bridges are dangerous, and nothing gets done to make them any better.

Because Lake Shore Drive is part of U.S. Highway 41, the responsibility for the bridges' upkeep belongs to the state government.

Illinois hasn't had a state budget in two years, and has a backlog of bills that totals over $11 billion. While the bottleneck causes social services to turn people away and cut staff, the state's infrastructure, including these two 80-year-old overpasses, continues to deteriorate.

In 2014, Ald. Cappleman wrote, "The work for these underpasses will need to last until the State of Illinois has sufficient funds to do the major overhaul of the bridges, which could be ten more years."

We said it then and we'll repeat it now: The band-aids aren't working anymore. Those overpasses don't have another ten years left in them, according to experts in the field. Someone is going to die if the state doesn't come up with money to fix them, and soon.
By Kate Uptown - February 16, 2017