One Of Uptown's "Sugar Magnolias" Sentenced To 45 Years In Prison 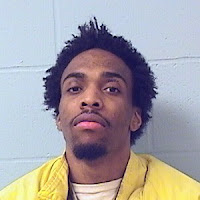 One Friday night back in December 2011, four Uptown gang members decided it was time to settle some scores.

They injured four people in a drive-by shooting at the corner of Wilson and Sheridan in the early evening, critically injuring one. They escaped by speeding off down Sheridan... on the sidewalk, which was full of pedestrians.

Later that night on the West Side, a 17-year-old male was shot in the chest shortly after midnight. The shots came from a van full of men matching the descriptions of the Uptown shooters.

The van headed toward Uptown. It was spotted by the police, and a pursuit began.

The suspects exited at Belmont, were pulled over by an officer, and took off again, heading south in an attempt to avoid capture. What they didn't know was that roadblocks had been set up on the Drive, so the chase ended when they slammed their van into a police vehicle that had been used to create a barricade near Fullerton.

Someone at the scene told us that four men, "all from Magnolia," were pulled from the van. One was Omari Robinson, known in Uptown for being arrested in the "Sugar Magnolia" drug bust ten months earlier. Robinson was taken into custody right there on the Drive.

Another person who was charged with him, Asif Menom, was killed a few months later in a shooting outside Krush nightclub in West Town. We had reports at the time that Omari Robinson was with him, but we could not confirm them.

The wheels of justice grind slowly, but they do grind away. Earlier this fall, Omari Robinson was sentenced to 45 years in prison for attempted murder. Given the time he has already served and the way Illinois computes prison sentences, he will not be eligible for parole until February of 2050.

He was 19 when he was arrested as a Sugar Magnolia for dealing drugs. He was 20 in December 2011. He'll be in his late 50s by the time he has completed his sentence.

When he gets out, no one in his gang (should it still exist, which is doubtful) will remember him. Gang loyalty? A joke. There is no doubt that Uptown is safer with him behind bars, but it's really sad to see young men buy into the life, not realizing that "loyalty" is a one-way street.
By Kate Uptown - December 27, 2016