Jesus Ortiz, Missing Since September, Found On West Side 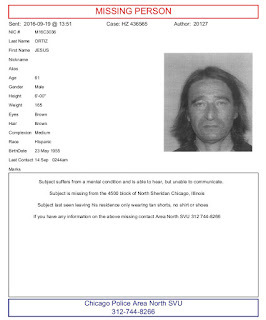 An Uptown family received some long-hoped-for news this evening.

The family of Jesus Ortiz has been frantic since he disappeared from his home on the 4500 block of Sheridan late one night in September. Mr. Ortiz has a disability that renders him non-communicative, although he can hear.

Saturday afternoon the CPD released a photo and description of a "John Doe" found unconscious on the West Side. He was found last Monday lying on the ground at a bus stop, wearing multiple layers of clothing. He was brought to Loretto Hospital, where he regained consciousness, but was non-communicative.

One line of the release stood out: "Subject seems to respond better when spoken to in Spanish as opposed to English." The height matched that of Mr. Ortiz, although "John Doe" was bald and weighed about 20 lbs less than Mr. Ortiz did when he went missing.

We called the CPD's North Side Special Victims Unit and asked them if John Doe could be Mr. Ortiz. They told us that they had received many calls making that connection, and that it was, indeed, he.

It's not the ideal circumstances under which his family had hoped he would be found, but he is now identified and alive. We may never know where he was during those three months, from whom he got clothing, how he got to the West Side, or who shaved his head.

But he is alive, and hopefully will soon be home. His family no longer has to wonder where he is. We can't imagine how relieved they are, and we are happy for them.
By Kate Uptown - December 11, 2016