Uptown is coming to CBS, probably in early January.

Chicago playwright Tracy Letts wrote Superior Donuts as a comedy about "the off-beat friendship that grows between the cantankerous white owner of a struggling Uptown Chicago donut shop -- a former radical who holds on tight to the past -- and his only employee, an ambitious African-American teenager who has big dreams for the place." It premiered at Steppenwolf in 2008 and has since played on Broadway.

CBS shot a pilot of Superior Donuts as a half-hour sitcom last March, then recast it and reshot it in September. It was picked up by the network as a 13-episode mid-season replacement in late September. 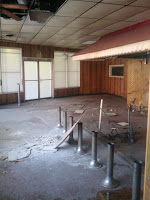 It will probably not be filmed in Uptown. The latest publicity materials simply describe its setting as "a quickly gentrifying Chicago neighborhood." (But we all know exactly what one it is.)

Fun Fact: It is widely held that Letts based Superior Donuts on the long-closed "Wilson Donut Shop" in the Wilson Red Line Station. It was located one door north of the main Broadway entrance (see photo at left).
By Kate Uptown - October 10, 2016