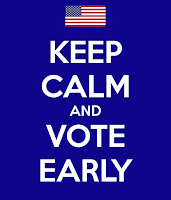 If you're as sick as we are of this endless election cycle, you can create your own personal November 8th and vote now. If you're willing to go downtown, that is.

Early voting is available in the downtown area only, until October 24th, when it expands to the neighborhoods.
So here's the when and where of early voting:
The entire list of early voting polling places is here.

The hours for early voting beginning October 24th are:
On November 8th, Election Day, voters must vote at their assigned precincts.
By Kate Uptown - October 04, 2016