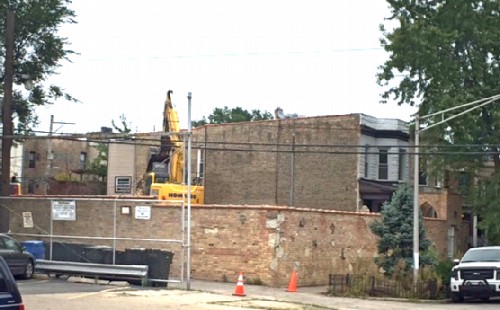 We're sorry to see that the century-old mansion at 1468-1472 West Winona has been demolished. Usually known as the "Reza's house" (since it was previously owned by the family of Reza Toulabi, the restaurateur), it sold last May.

Neighbors and Preservation Chicago were working with the 47th Ward office to try to save this 6-bedroom, 4800sf home, but according to this photo that reader SW sent in today, their efforts were in vain. It was orange-rated by the city, which meant that it "possessed some architectural feature or historical association that made it potentially significant in the context of the surrounding community."

According to the WFCW Block Club's Facebook page, "Jeff Parise who has the contract on the building shared that his plan is to demolish the buildings which he says are in poor condition and build a new 3.5 story 9-unit condo building with 9 parking spaces."
By Kate Uptown - September 23, 2016