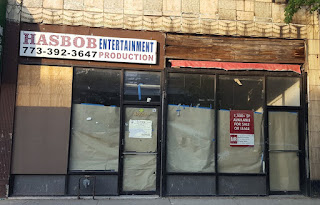 Earlier this spring, workers spent a month rehabbing and renovating the interiors of two small storefronts on the 4600 block of Broadway. They changed the electrical; restored them into a single unit (correcting an ill-advised recent subdivision); put in a new ceiling and walls; and turned two sad little spaces into a single "vanilla box" ready for a tenant.

The most interesting thing about 4629 Broadway (located between Iyanze and Elim Wigs) is its vintage terra cotta facade. It was designed by architect William H. Harley, Jr in an art deco style. The building was completed in 1930, making it one of the very few Uptown buildings to be built during the Great Depression. 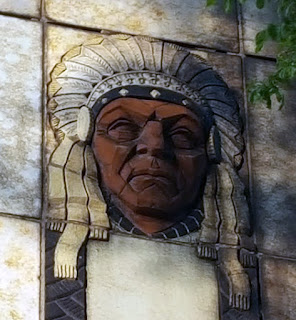 Although the two chief heads are the most striking part of the design, it's all pretty intricate. The bottom tiles undulate, and resemble the bottom of a stage curtain, perhaps a tip of the cap to its many neighboring theaters, including the Riviera, the Uptown, and the Aragon.