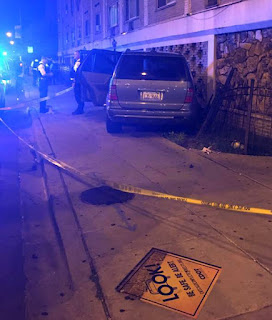 Tonight shortly before 9pm, a 42-year-old man was shot several times in Edgewater. The shooting occurred on Kenmore between Berwyn and Balmoral. Witnesses reported hearing shots and seeing a dark blue Mercedes speeding away from the scene, heading south.

The Uptown connection is that the Mercedes crashed into the four-plus-one apartment building at the southeast corner of Foster & Sheridan, where police found it and called for an ambulance for the injured driver.

The man was taken to Illinois Masonic, where his condition is stable. The car is registered to an address on the 6100 block of Sheridan.

According to the Sun-Times, "[The man who was shot] was inside [a different] vehicle with another person about 8:50 p.m. in the 5300 block of North Kenmore when the other person pulled out a gun and shot him in the abdomen, according to Chicago Police. The man then drove off in another vehicle [the pictured Mercedes], which crashed in the 900 block of West Foster, police said."

The police believe the shooting was drug-related (no kidding). You can see at least one bullet hole in the back panel of the crashed Mercedes, so it looks like the person who shot him continued to shoot at the Mercedes as it pulled away.

This is only tangentially an Uptown story, since everything except the place the car crashed is Edgewater-related, but we know people will be wondering about it. Thank you to reader Rob Graves, who submitted the photo to UU's Facebook page.

You have to appreciate the sign the car ran over on its way to hitting the building. You can even see the tire tracks it left.